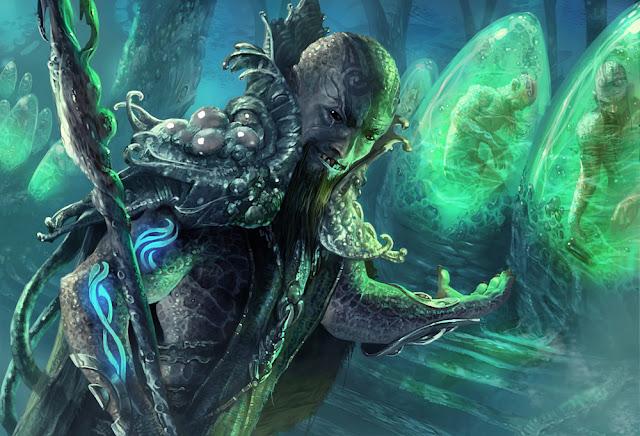 This is my first attempt to create an OSR class. It uses the LotFP magic-user class and spell-list as the base.

Note1: This has only just begun being playtested!

Note2: Given how reliant this class is on the LotFP Summon spell, I would encourage the use of Saker's Summon Hack, which streamlines the Summon spell, increases the chances of rolling fun appendages and powers, and "balances" it a little bit. The original spell, besides being a little cumbersome, is really awesome in its own right, but I think this hack makes a little more sense for the purpose of this class.

Note3: Even if you take nothing else from this class, I would encourage you to check out the Metaphysical Metamorphoses. I think they're pretty cool…

Note4: I would like to thank Saker Tarsos and Lungfungus for proofreading, editing, and providing various other comments and suggestions. Additionally, Saker is playtesting this class in my SHIELDBREAKER campaign which I greatly appreciate!

Description:
Apoptosis: The death of cells that occurs as a normal and controlled part of an organism's growth or development. Apoptomancers hijack the immune system. They tickle the vagus nerve, they aggravate the gut microbiome, they command cells to commit ritual suicide so the organism may be reborn. While the metamorphs they create are often thralled to them for the sake of convenience, the goal of apoptomancy is to create uncanny, beautiful, and thriving new lifeforms, and to protect themselves and others from illness and the mental trauma of the neuro-immune response. Of course, not all doctors follow the Hippocratic Oath, and not all apoptomancers have such noble intentions...

Stat Progression: Use the LotFP magic-user class starting stats and stat progression, but rather than the starting spells and one new spell each level, follow the below class abilities progression.

Class Abilities: For each level, take all that apply (or any ability/spell from a lower tier).

Lvl. 1: Create Metamorph AND (Metamorph Companion OR Trans-Metamorphic)
Description: Everyone gets to temporarily metamorphosize creatures they encounter, but at level 1 you can decide to either have a permanent metamorph companion, or metamorphosize yourself (you can always take the other at a higher level!).

Lvl. 2: Metamorphic Template OR Apoptomancer Spell
Description: Templates allow you to recast metamorph effects you’ve used before. There is a short apoptomancer spell list, but any magic-user spell that can be reinterpreted as apoptomancy can be chosen as well. The spell list is just a set of examples.

Lvl. 3: Super Metamorph
Description: Give your metamorph companion (or yourself, if you’re trans-metamorphic) more mutations (temporarily)!

Lvl. 4: Re-Metamorphosis
Description: If you don’t like your companion’s metamorphosis (or your own, if you’re trans-metamorphic), re-roll!

Sympathetic Response (trait): Metamorph Companions or Trans-Metamorphic characters who fail their domination roll gain this trait. When bloodied (< Half total HP), depending on how much they failed their roll by, the following effect is activated for 1d6 turns:

Metamorphic Template (class ability): After casting Create Metamorph, if the template is saved, you are always able to create this metamorph effect.

Super Metamorph (class ability): Create Metamorph can be used to temporarily change the base form of, and add appendages and powers to, creatures that are already metamorphs.

Microbiotic Compatibility: Apoptomancy alternative to the charm series of spells. It can be taken as a lvl. 1 spell (as Charm Person), lvl. 4 spell (as Charm Monster), or as a lvl. 8 spell (as Charm Mass). Alters the microbiome of the creature, inducing a neuroimmune response making them open to suggestion from the apoptomancer.
Super-Inflammation: Apoptomancy alternative to the Cleric Cure spells (e.g. as lvl 1 = Cure Light Wounds, as Lvl. 4 spell = Cure Serious Wounds). The apoptomancer hyper-activates the immune system of the target, leading to rapid healing (i.e. as Cure). However, after 1d6 turns, the target must save against paralyze or become fatigued and depressed as a result of neuro-inflammation. The duration lasts as many minutes as turns it took before feeling the fatigue. During this time, they have -1 to all rolls (as LotFP Sleep Deprivation).
Detect Pathogens: Level 2, 10'/level, 5 rounds/level. The apoptomancer can detect dangerous particles in the environment by consciously focusing on their vagus nerve and immuno-sensory system.

Immuno-Sensory Perception: Level 2, 1 turn, 60'. The apoptomancer enhances their vagus nerve and immuno-sensory system to the point that they can detect and interpret the microbiomes of creatures in range. They can use ISP to read thoughts and emotions, not unlike ESP. While less precise than ESP, it is more useful for detecting tonic states and unconscious motivations than ESP.

Inflammasome: Level 4, 0 range, 1 round/level. The apoptomancer secretes symbiotic fungal and bacterial organisms and other cells and particles from their microbiome in a 10' diameter sphere around themself. Within the inflammasome, both pathogens and physical threats can be detected, and immuno-sensory signals are cascaded back to the apoptomancer, pre-activating a defensive inflammatory response. All pathogens are ignored, and damage activates super-inflammation (as Cure Light Wounds). However, after 1d6 turns, the target must save against paralyze or become fatigued and depressed as a result of neuro-inflammation. The duration lasts as many minutes as turns it took before feeling the fatigue. During this time, they have -1 to all rolls (as LotFP Sleep Deprivation).

Pyroptosis: Level 2, 20', 1 round/level. Same effects as ray of enfeeblement, in addition to the following. For the duration, the target receives +2 AC of natural super-inflammation armor and damage reduction 2. However, at the end of the duration, the target must save against paralyze or become fatigued and depressed as a result of neuro-inflammation. The duration lasts as many minutes as turns it took before feeling the fatigue. During this time, they have -1 to all rolls (as LotFP Sleep Deprivation).


Anti-Cancer: The metamorphosis sets off an apoptotic genetic cascade of anti-cancer. Over 1d4 days, the metamorph undergoes teleological anti-mutation, transforming into an harbinger of the anti-mutants. The harbinger finds a suitable location full of life, and begins terraforming it with noxium fumes and prasium. Over 1d4 weeks, as the atmosphere and geological composition of the region is transformed, the harbinger will build structures resembling those found on the Green Moon. At the end of the terraforming project, as many hordes of anti-mutants as the duration of weeks it took to terraform the region will arrive from a noxium-tear in the paraverse and colonize the region. They will continue to spread until they have terraformed the entire world. If they succeed at terraforming the entire world, they will spread into every moment of the world in the paraverse. If they do so, the world will become like an egg, birthing the anti-mutant teleological end-state (essentially the anti-mutant god), and will continue to spread across the rest of the paraverse, and then the multiverse, and then the omniverse, and then...

The Gate: A dormant psilosymbiote germ, something like a fungal, bacterial, or viral pathogen from another universe, is apoptotically activated. Over 1d4 days, the metamorph undergoes psilosymbiosis. The apoptotically-enhanced super-strain provides it +2 HD and one new beneficial mutation/power each day for the duration of the transformation, and on a successful attack it has a 1 in 6 chance of spreading the infection. If it is still alive 1d4 weeks after full psilosymbiosis and has created as many super-psilosymbiotes as it has HD in that time (or any of its spawn have done so), all of the super-psilosymbiotes merge into a spire beaming impossible light into the sky, a beacon which opens The Gate to another universe: Yog-Sothoth. Impossible light orbs fill the skies, and all sorts of eldritch, impossible creatures and a-logical principles seep into the universe.

The Fourth Wall: The metamorphosis activates a neural pattern, a mental representation, like a meme, connecting it to the Real World (the world of the players). The consciousness is merged with that of the real-world person (player/GM), and they can bring any meta-game knowledge with them. The real-world person should stay in contact with the rest of the party even when they are not in a game session, informing them of what the metamorph is doing in the game world. Real world emotions, cognitions, sickness, etc., should apply to the metamorph. If the real-world person fudges a roll or secretly changes their or an NPC's character sheet, it is now Truth within the game universe. Most other characters in the game world, even paraterrestrials, are fundamentally incapable of or unwilling to acknowledge this, and will engage in whatever cognitive dissonance necessary to deny the obvious truth.

Narra-ativistic Organism: The apoptotic cascade has atavistically activated a metaphysical state in the organism from a time when the rules of the universe were narrativistic rather than mathematical, like fey wood. Decide on a narrative arc for this metamorph, and choose any story-game system and character build to best facilitate this arc. OSR or not, the metamorph is now playing by a different set of rules.
Posted by maxcan7 at 11:31 AM