Inspired by my interview with Semiurge, and as a means of procrastinating on other things I really want to / need to do but am feeling suddenly burnt out on, I have created my first Semiurge-style generator. This is a D6xD6 generator for everyone's favorite monster, the fantastic flumph! 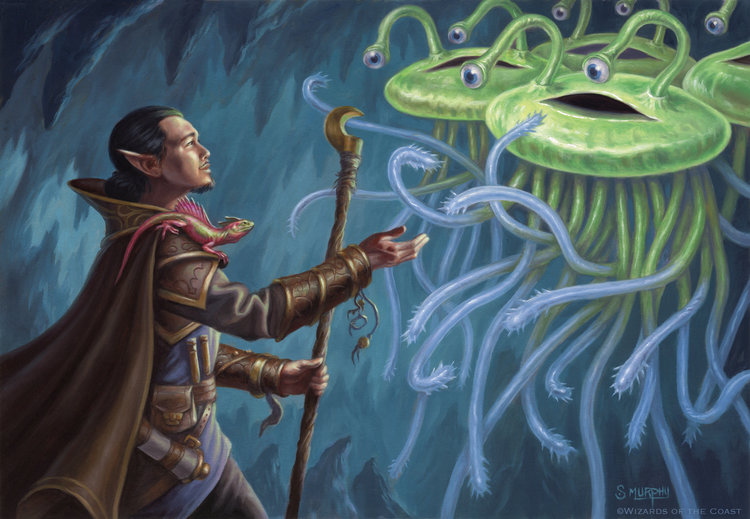 Feast your eyes on the fantastic flumphs!

With all the talking of elements I've been doing lately, I thought it would be interesting to make an element generator. Elements are by definition the primitives of the universe, but in the case of the alchemical elements often found in fantasy, they are also symbolic, which gives us a little more room for interpretation. I think it is necessarily the case that even with this generator, a lot of manual work will be required to make elements drawn from this table coherent. I was originally going to write up a full setting from a random drawing of four elements to really demonstrate what it might look like, but I've been too focused on my Maximum Recursion Depth setting and can't really think about it right now, but I'll write up four example elements just to give you all a sense of it.

The properties of the generator are color, state, and two additional qualities.

Color is fairly straightforward, although I intentionally throw some weirder ones in there. It can be the case that color is a literal property of the element, or it's more so a cultural association. Additionally, while I do distinguish between blue and cyan for reasons, generally a color can encompass a broad range (green can be forest green, neon green, etc.)

State includes not just solid, liquid, and gas, but also plasma, freezing (between liquid and solid), vaporizing (between liquid or solid and gas), and ionizing (between gas and plasma). These are not intended to be taken too literally or scientifically, but I have this feeling which I can't quite articulate that state provides some unique point of reference for elements. I realize that, with the traditional elements, ice is often sub-set into water and I think it's fine to give yourself a similar amount of leeway with these elements. Still, I think water as liquid has a certain symbolic resonance ("go with the flow"; water flowing around a large stone, a river carving a canyon).

The additional qualities are a mix of mostly visual and tactile features to give the element a little more flavor. I decided to go with two per element to create a bit more variety and potentially interesting combinations, and just to be more descriptive. It can produce results with duplicated qualities; you can either ignore the duplicate, or treat it as an exaggerated version of that quality.

I had considered also adding some more symbolic or metaphysical tables as well, but ultimately I decided that I preferred to allow the symbolic and metaphysical aspects of the elements to be an emergent property of the rest of the elements and how they fit together within the setting, rather than trying to pre-define them, although I think that could be interesting as well in a different way.

Given this generator, the traditional alchemical elements might be represented as such:


As you can see it requires a bit of a stretch of the logic to get the traditional elements from this table and they can potentially be represented in multiple ways, but I see all of this as a feature not a bug ;).

I might be tempted to curate my elements if I really want to build a whole setting out of them and not go full-random, but if you're less hung-up on elements than I am, or just want some weird material for a one-off instance, this generator should be good.

I haven't done javascript stuff in a while so this will almost certainly be broken at first but we'll see... 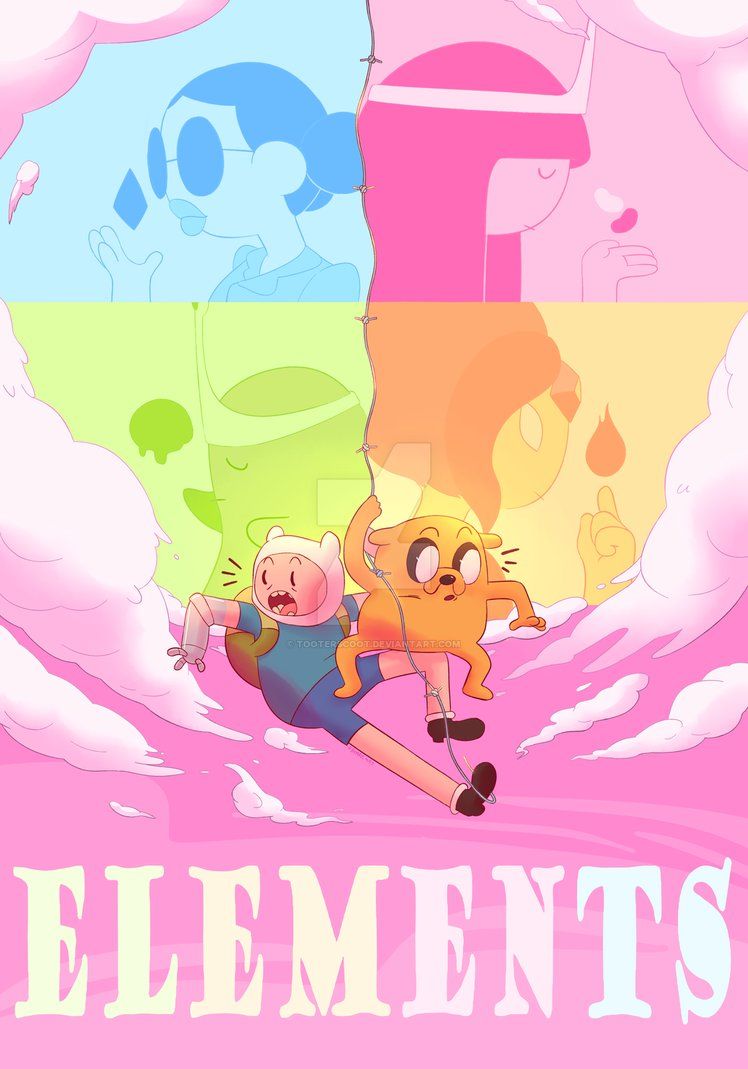 Minute particles in the air which condense like a sheet of frost over objects on cool mornings and winters. The song-glass is nearly invisible except for a slight cloudy sheen. It cracks easily to the touch, producing a fuzzy, static-y noise. Ancient shamans and philosophers learned how to decypher these noises into information, which gave the species valuable knowledge about the world and how to survive in it. They later learned to encode messages into song-glass, build devices to speak the messages or project the images of song-glass, and eventually even to transmit vaporized song-glass ethereally over vast distances.

A dull, gritty, cyan-colored sand, believed to be condensed air. When rapidly shook, popstones crackle and pop like thunder and lightning. The thunderstorms of popstone deserts shine so brightly they twinkle like stars. The weaponization of popstone quickly led to the species' dominance of the world, and later they also learned to harness the power of popstone as a source of energy and means of locomotion.

Marbled like fatty meat, bleeds like a wet sponge to the touch. Not quite animal or fungus, neither organic nor inorganic. Believed to be the rendering fat of the gods. It absorbs properties of the things it touches, like DNA and also things beyond the measurements of modern science, and provides sustenance when absorbed through the skin or consumed. Godrend swamps burble and jiggle and dance, especially on nights with starry skies. Outside apocrypha, the species are the only ones capable of deriving sustenance through godrend; it is what separates the species from animals.

Light which is absorbed but is not transformed into heat, and is instead gated behind a one-way liquid medium to suffocate, ferment, and die. Like liquid eclipse, one can sense the energy of light by its absence, its shadow. Shadowbrine is found in caves and other dark places, and most abundantly in the hard to reach depths of the oceans. Shadowbrine brewers mold their processed concoctions, and as the sun rises and as the sun sets, the object which would block the light to create the shadow rises in its proper place. This is how the species' cities were first formed and mostly how they are formed still.
Posted by maxcan7 at 2:33 PM 3 comments:

I spontaneously decided that I wanted to start doing interviews, so I interviewed Semiurge of the blog Archons March On. His random generators are some of the most creative and useful tools in all of the OSR, and I genuinely believe Semiurge to be one of the most talented and creative bloggers in the OSR blogosphere. I enjoyed this conversation quite a bit and would potentially like to do more interviews like this. If you enjoy reading this and would like to see more, please let me know!

Why don't you start by telling me a bit about yourself and the blog.

Why did you start the blog?


What are your inspirations?


Many of your posts are these very specific, multi-layered generators, which produce all sorts of weird and wonderful results. What about this format in particular appeals to you so much? What is your process?

Do you worry that you'll run out of sufficiently original or interesting premises for these tables?

What are some of your favorite systems and settings?


Do you have any thoughts about the future of the OSR, blogosphere, RPG industry and community in general, etc.?


Ok, I do have one more question that I'd like to end on, but before that, are there any questions I didn't ask that you'd like to talk about, or just in general anything you want to say?


Can we talk about "Platinum Big Dick Baller"?

I keep talking about elements and their significance to me (this post about the positive and negative plane, which further links to other posts where I discuss this as well). When it comes to elements, I generally prefer to create worlds of new elements, either entirely made-up like Impossible Light, Absolute Solid, Anti-Information, and Liquid Starfire, or of real things (or at least real fictional things) like Phlogisten, Yeast, Lymph, and Ectoplasm. However, I had the thought the night before drafting this post; what about a world with the typical alchemical elements (in this case I'm assuming Fire, Water, Earth, and Air), but where one of the elements is missing? How do the other elements adapt or develop? How do the organisms, the cultures, the gods, and monsters and magic?

There are a few key points to my thought process:

These are very brief. I've been struggling with putting my thoughts to words lately; I'm sitting on several new settings which I think are really cool but just haven't been able to write them up. There's something to be said for brevity though, so maybe it's ok if they are just brief little blurbs.

A World with no Earth

Large ocean. Pillars of ice the size of cities pulled up towards the sky, connected by bifrost bridges. Rays of focused light rain from the sky like beams of holy light, burning into the ever-rising pillars, sculpting the landscape, and inducing violent wave patterns into the ocean. This is a world of constant change and high concepts, of flight and mobility, a world that feels light and airy. 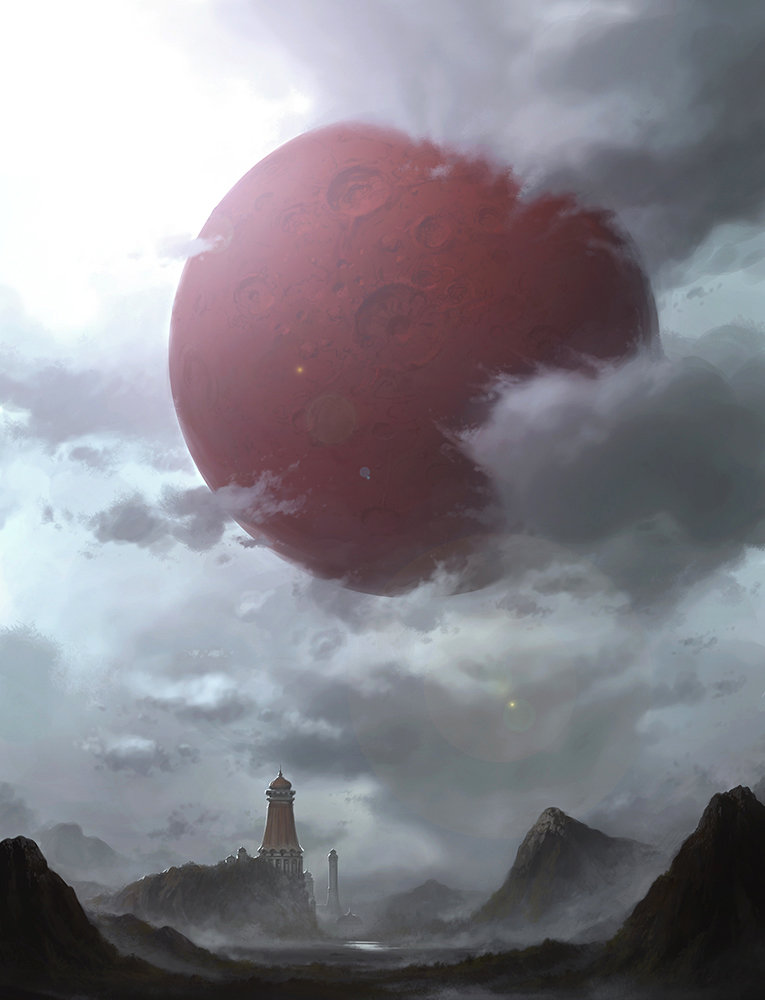 Red Moon. Couldn't find a good image with a red moon, steam or smoke vents, and red hot stones and glass, but I think this gets the vibe across of being fire-less and dark.

A World with no Fire

Harsh winds vibrate glass and stones to glowing red. The world is pocked with vents of steam and smoke from naturally-occurring coal and hydrothermal power. A softly glowing red moon provides barely any heat or illumination. On land, this is a harsh and tired world of survivors, of competitive energy-oases. It is a world of little change and little accrued knowledge, except what is necessary for survival. In the bubbling oceans, hot-water life thrives. Who knows what rests in the energy-rich deeps... 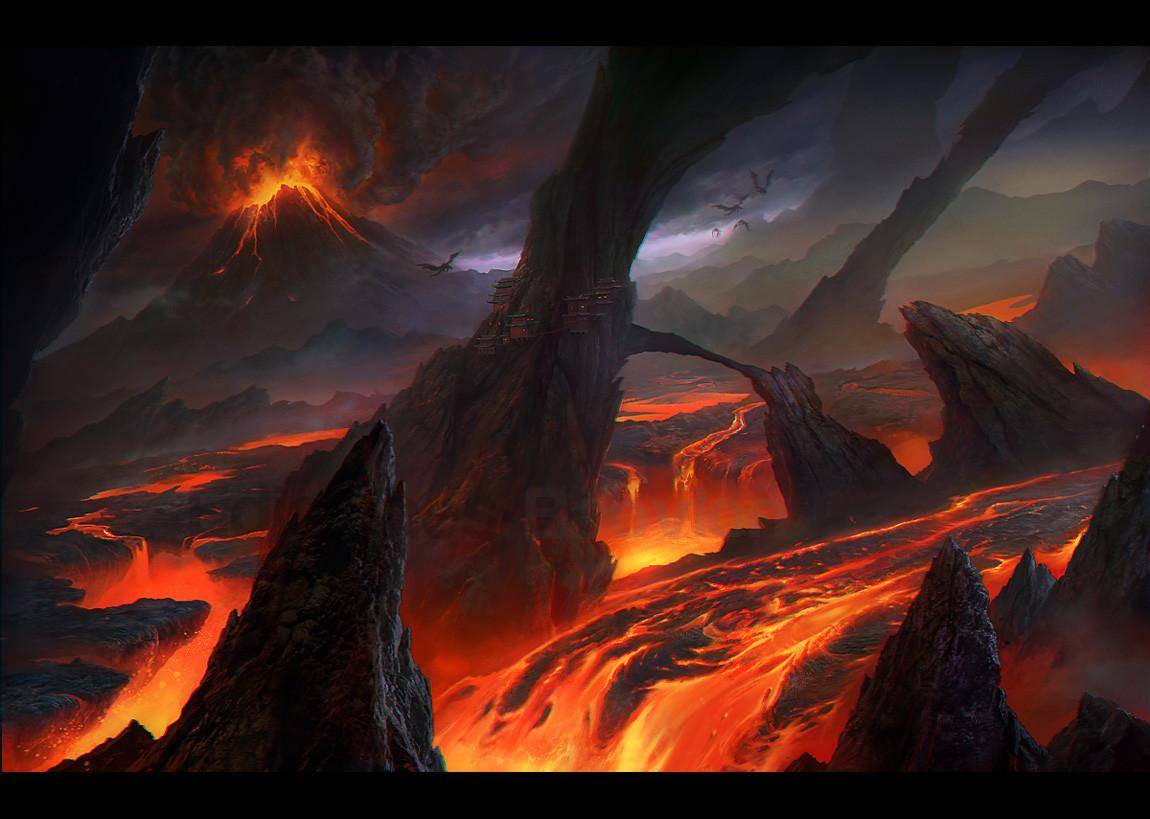 Lava Fields. No gelatinous air and cities on glass planes.

A World with no Water

Magma oceans. Gelatinous humid air. Glass planes cut through swimmable air; a vertical landscape. This is a world of strict hierarchy, of unmoving objects, of tradition and propriety. Except for the sky pirates...

A world with no Air