Batteries Not Included is a game by Spwack of Slight Adjustments (and formerly Meandering Banter) that I instantly fell in love with. I have not had a chance to play it yet for myself, but I nonetheless felt compelled in my foolish ignorance to write a series of hacks and expansions for this game! I have a very rough setting idea and if it ever comes together I'd like to try it out.

I had posted a review a while back about Gamma Knights, an expansion for Gamma World which added power armor. I had said that I felt it was perhaps a bit too crunchy and fiddly for my tastes, but had some cool ideas, and that I would like to conceive in the OSR / DIY fashion a stripped down version of Gamma Knights for power armor and mechs. And then I never did. And then Spwack did it better than I ever could have anyway.

So below I outline suggestions for how to play the game without cards (I love the card idea but don't like being obligated to do work like print out cards!), how to integrate BNI into a more traditional OSR-style game as a sub-mechanic, and an adaptation of some Gamma Knights concepts using BNI rules. I was originally also going to include a Weird & Wonderful Hack with a set of modules using my own ideas, but I might save that for a future post instead.


One last side note: I was recently featured on the titorpg blog and I wanted to give him a plug now because that was super awesome of him. I would like to give him a more dedicated plug down the line because he deserves it, but for now hopefully this will suffice. He has produced a few books available on drivethrurpg such as sacrebleu, an open-ended module with WW1 weapons and plenty of Weirdness, for the OSR-adjacent game Sharp Swords & Sinister Spells which you all know I'm a fan of. One of my favorite posts from his blog is Bargain Bin Mindflayers. I had intended to do a followup post of it but almost a year later I still have not done so, so if I can find the inspiration I will try to make that a priority.

Anyway, on to BNI! This isn't so much a hack, as just a list of suggestions for how to play BNI without cards.

This hack is intended for using the mechanics of BNI for Power Armors or Mechs in an OSR-style game. It's not necessarily going to be compatible with all versions of OSR or OSR-adjacent games, and has not been playtested (I haven't even played BNI!). It could maybe also be used for a BNI robot class. This is just a proof of concept. 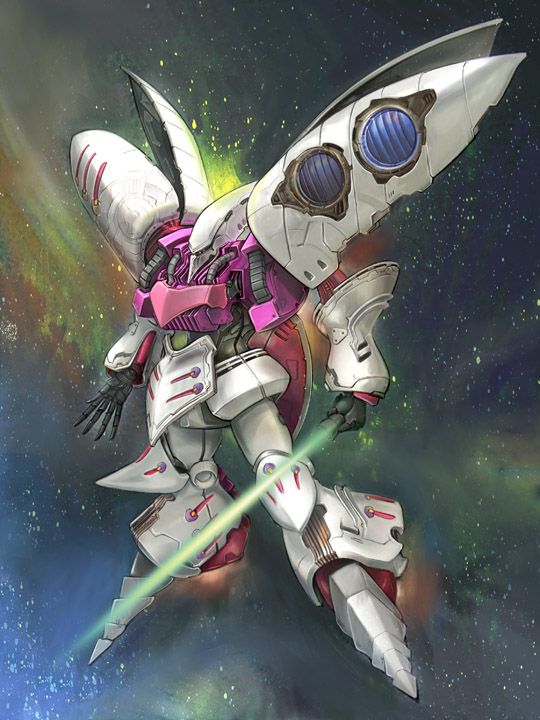 Qubeley, one of my favorite mecha designs from Gundam

This hack adds some modules or mechanics from Gamma Knights, the Power Armor expansion for Gamma World. It is also intended to be compatible with the OSR Compatibility Hack above. Note that some of these assume there is a pilot, as opposed to being a robot, so just ignore those if you're playing as a robot.

Also just a caveat, it's been t least a couple weeks since I first read BNI, and while I've discussed it with Spwack, especially having not played it, I may be misremembering or misinterpreting certain rules, or there may be certain modules here which are redundant with ones on the original list that I somehow missed. If you catch any mistakes please let me know!

A "real" post should be coming soon, just haven't had the time or energy but I'm sitting on a million ideas and they keep coming so hopefully some day soon I'll have some good stuff incoming.

Anyway, here's a not-review for Super Blood Harvest, which I just read in its entirety just now.

It's by Dirk Leichty who was also the artist on Silent Titans, and like Silent Titans it's doing a very unique brand of Weird Science Fantasy using a system derived from Into the Odd. The first two issues are in a setting vaguely reminiscent of Vampire Hunter D set on a Space Hulk with all sorts of weird science, vampires, eldritch things, and I'm not doing it justice with that explanation but its very cool. Dirk's art is amazing, and he infuses a retro video-gamey style that makes it feel as much like Castlevania or Doom as Vampire Hunter D.

The third issue is set in the far future of the first two issues (I think) and really takes things to a whole other level. At first glance it's a Barsoom meets Terminator pastiche, kind of, but that really does not at all do justice to how disturbing, Cronenbergian, Orwellian, generally dystopian, and Weird this setting is. It's kind of like the Matrix too, or at least Zion, except not shitty. It would not be possible for me to describe it in a way that does it justice, but it is unlike anything else and also I'm reasonably confident there is much more going on there than I had the mental bandwidth to fully comprehend as I was reading it.

I realize I don't have a whole lot of professional RPG work to my name aside from this blog, but Dirk, if you're reading this, I'd love to work with you some time! 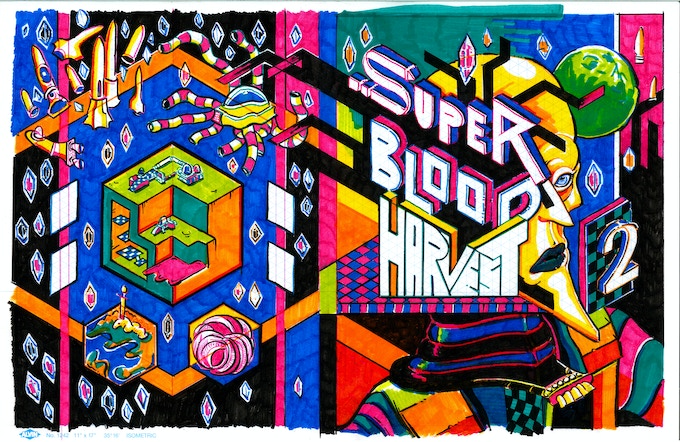