EDIT: I think I should state more clearly (I explain this in my comment Kyana): This is supposed to be like a TTRPG in itself, where the medium is the blog and the RPG is a Variety Show themed around blogosphere stuff. I, the blog writer / GM am the Host, and the readers / commenters / players are the Audience. So you can "heckle", or make a mech character who may get brought up on stage next episode, or you can take this idea and run with it yourself on your own blog and make your own pirate broadcast of Weird & Wonderful Wavelengths. It's sort of a... I dunno, maybe it's pretentious to say performance art, but it's like the blogosphere TTRPG equivalent of performance art.
Hello, ladies & gentlemen & all other folks, welcome to Weird & Wonderful Wavelengths, the one, and only tabletop RPG Variety Show. The original footage has sadly been lost to the dark depths of the multiverse (that's a storyline for another time), so here we'll be transcribing an approximate reconstruction of the show using our trademarked, patented, and copywritten quantum golem learning algorithm (TM, C, etc.)*
*This is an experimental technology, there is a 1% chance this episode induces nirvana, Weird & Wonderful Worlds cannot be held liable for damages.
This is an all-new venture, something a bit experimental. Maybe it'll work, maybe it won't, but what would be the point of the Weird & Wonderful brand if we didn't try to do new things now and then amiright? We'll see where it goes, I'm open to suggestions and hecklers in the audience. Maybe next episode we'll even bring some people on stage! Anyway, please keep in mind this is just a pilot, but I hope you all enjoy the show!
We're going to be starting off with a musical number by my old friends, Junior Senior:
EDIT: it appears that the video embeddings don't work in mobile mode. Cool! I'll just include links I guess...
Junior Senior Move Your Feet
What a wonderful performance. I hope you're all getting excited now for what's to come. Let's move those feet towards our first act.
We're going to build a character for Batteries Not Included!
Yesterday you were in a warehouse, processing angry customer complaints. This morning you were on a plane. Five minutes ago, you were falling from the sky. One minute ago, you found a wheel, a taser and a claw amongst the wreckage. Right now, a metal monstrosity with tank treads and a chainsaw is yelling at you: "YOUR LIMBS. GIVE THEM TO ME."
What a dramatic start! I'm really looking forward to seeing how this plays out. This is Mechs and Battle Royale and Tabletop RPGs, and something I've been interested in for some time now.
Core (+P / [H] / +5 modules / cannot be tapped)
Tactical Simulator (TP: "undo" an action you just took, it was a simulation)
Turbine (while in fast flowing water or gas, +PP)
Minigun (A: D / fast)
We start with a default Core, capable of holding up to 5 modules, with +1 Power and a Heat Capacity of 1. Because Minigun is a starting module that requires ammo (A), we start off with two units of ammo. Given the Turbine, which gives us an additional +2 Power in water (if I understand correctly myself) our Mech will likely prefer to operate near water, but since our only module so far that uses Power is the Tactical Simulator (which costs 1 Power and must be Tapped to use), maybe we should focus on gunning down enemies and stealing their modules first!
And that's it, folks! Meet our new Mech: Hydro-Max Platypus! Tune in for the next episode and we'll see how our new Mech fares!
Are there any other Mech pilots in the audience? If there are any pilots, raise your hand! One lucky audience member will be brought up to the stage next episode to face off against the RapidFire Dynamo: Hydro-Max Platypus! 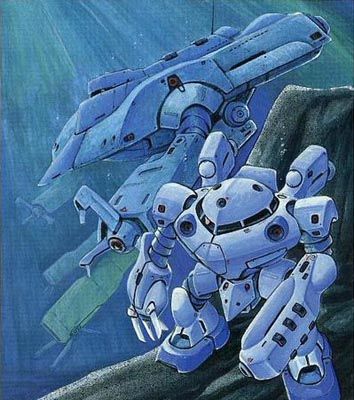 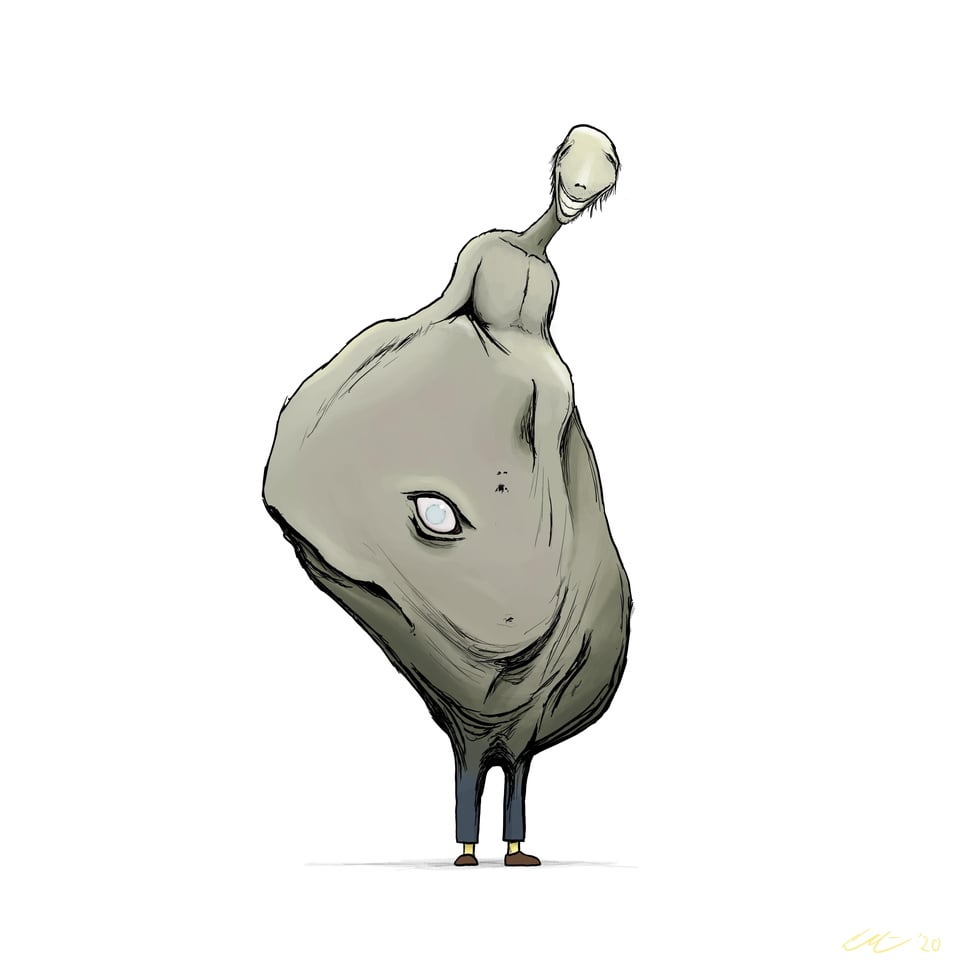 Moving On.
It's been a while since I've posted a micro-setting. This one has technically been featured before, but it got buried in a dump so I thought I'd feature it again.
(Heckler in the Audience) Why dredge it out of one dump just to toss it into another? *badum dum tss*
Heheh that's real funny, I didn't realize we had a joker in the crowd tonight. Well, all the same, let's take a look at the exotic Gasoline Swamp!
Gasoline Swamp
The Primordial Soup from whence hyperlife evolved. A species reminiscent of fungus covers the Earth, a constant hazy explosion of spores and heavy diesel energy. Animal life in this swamp, if it could be called that, take the adult form of tiny "pixies", full of manic energy. They have no mouths and other than the absorption of some transient energy, they have only the energy they absorbed in their tadpole state. The dominant lifeforms are hyperplants, tesselating undulating monsters that branch, root, fruit, and leaf in real-time. They are not photosynthetic and instead are mainly carnivores (fungi and animal eaters) or predators (herbivores), or some are omnivorous. Their biology is inextricably linked with plastics and microplastics, like if humans wore their microbiome on the outside. Their blood is diesel and most consumption is vampiric; diesel being the most nutritious substance for all hyperlife.
Well, folks, I hope you enjoyed this first episode. We had some fun, we had some laughs, we had some deep thoughts, but we haven't cried yet, or at least hopefully not, but this is a pilot so anything's possible I suppose. I figure, let's give our new psycho-spacetime machine a whirl, and head to another time and place and feeling within the emotional matrix, for our final act of the night, the lovely Julie London. Julie and I had a long talk about this, I practically had to beg her to bridge psycho-spacetime so that you all could enjoy this performance tonight (note that it's always Tonight on the Weird & Wonderful Wavelength). I know it seems weird to end on such a melancholy note, but such is life. So with all that said, may I present to you, Julie London: Cry Me a River.
Julie London Cry Me a River
Did you like tonight's performance? If this pilot gets picked up, the producers say they'd like to have more guests, more games, and more audience participation! They'll even accept heckles, so heckle away in the comments below. And if your station is interested in licensing this show for syndication, all you need to do is hyperlink this episode onto your own frequency; there's no streaming exclusivity here and all episodes are anti-canon including this one!
Posted by maxcan7 at 6:03 PM 9 comments:

The Indigo Saint's Cathedral: The Nightmares of Nocturnal Creatures (Ch. 2)

Email ThisBlogThis!Share to TwitterShare to FacebookShare to Pinterest
Labels: prose

I read Disk Horse a while back, by my Maximum Recursion Depth collaborator Fiona Maeve Geist (who is less famously known for her work on Mothership: Dead Planet). I meant to give it a proper not-review earlier and then got caught up in stuff, but here are some thoughts on the game.
Disk Horse is great. This not-review is perhaps the most NOT-review of any of my not-reviews yet, which is probably fitting for a game so meta. This probably won't make much sense unless you've read the thing, or even if you have, but hopefully, this will pique your interest if you haven't read it. 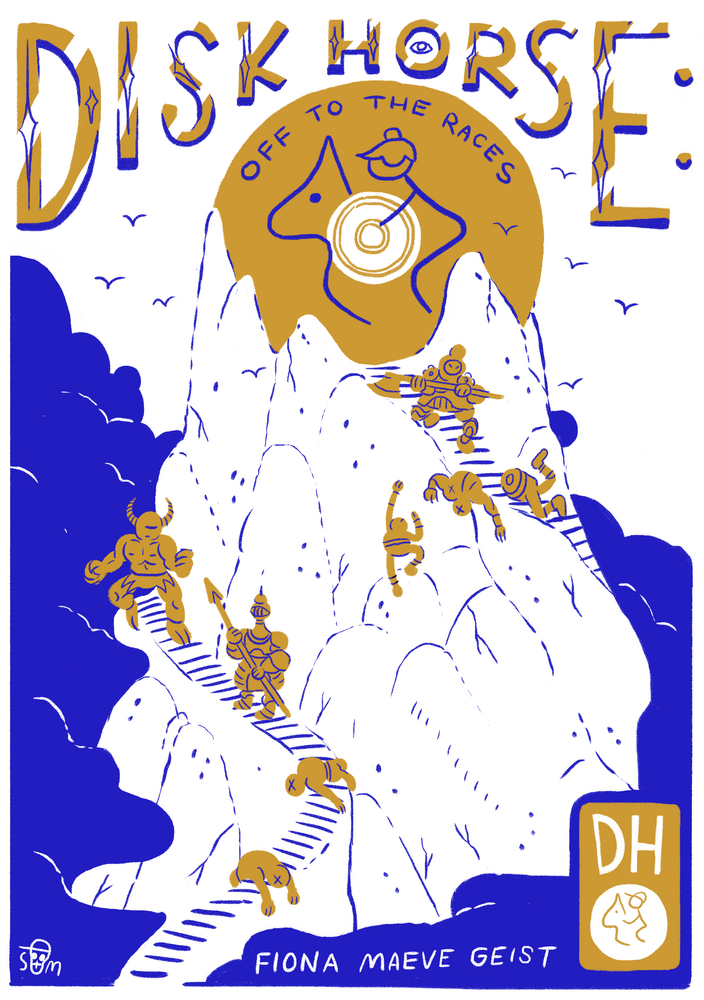 It is super-duper in-your-face meta at the onset, but it's very cleverly written and genuinely funny. Also, I could totally see myself unironically using this as a setting/module generator even though it's clearly making fun of most of the things it's saying. I actually think if it were presented slightly differently, it could be framed in a way that is only somewhat meta instead of super-duper meta and could maybe gain more traction that way.
It seems like there are at least two levels of meta, but I actually think the more difficult level of the meta is very front-loaded, which I actually think works in its favor. The most difficult level of meta is more intellectually interesting in my opinion, but I don't actually think would be that fun if I'm being honest, whereas the other level of meta, while not as intellectually engaging in my opinion per se, is something that actually seems fun and playable, and the game seems to have been designed more so around that level.
There's this level of the meta that seems to be about juxtaposing the bullshit of the satanic panic with the actual toxicity of people who get way too argumentative about game design theory, that's the intellectually more interesting but less gameable one (again, in my opinion), but then there's the other level that's more about making fun of how games actually tend to play out with real people, and the tropes and pseudo-intellectual or pseudo-original ideas that spring up, or how the players' personalities bleed into the game on every level, and the interaction of the game mechanics and the gamers playing them.
And there's a play report at the end; I don't know if it was actually a real game or if it was fictionalized, but I genuinely wish more RPGs had play reports like that written into them. Even though I'm not that into play reports in blogs (and neither are most people, if the view numbers on my play reports are at all generalizable to others' experiences...), I think within the context of a gamebook, demonstrating how to run the game or the feel it might evoke, when done well they are useful and entertaining. I suspect here it was designed more on the entertaining end than on the useful end, but nonetheless, a worthy inclusion into the book itself.
On the whole, if you're reading this blog, you're probably tapped into the OSR / blogosphere culture enough to appreciate what's in here, and open to poking fun at and criticizing the hobby and the culture while simultaneously reveling in it, and if that's the case, then you should give this a look.
Posted by maxcan7 at 11:21 AM 3 comments: