Maximum Recursion Depth, or Sometimes the Only Way to Win is to Stop Playing

This is a setting that I've been very very very slowly converging on for some time now, and it just finally started coming together in an epiphany last night. Despite the title I chose for this post, it has many titles, as I briefly mentioned when I first brought this idea up, but that was before I even came up with what has now become the core conceit.

It's titles are as follows:


Because of Covid, I had to put my last one-shot micro-setting on hold, unfortunately. We still plan to run that game eventually, but one of the players couldn't play from home (married with children) and another was feeling too overwhelmed right now, so I'm going to run this instead.

I think we're going to end up using Troika Numinous, not so much because it particularly makes sense for the new setting, but because it's a system I've wanted to try for a while. If it really doesn't seem like it's going to work I'll try something else, haven't gotten that far yet. If I'm feeling really ambitious I'd like to devise a karma system similar to Tenra Bansho Zero but significantly simplified to hack into this game / setting.

If you'll notice, very few of my settings (these being a handful of them) take place in anything resembling the real world. I've always enjoyed urban fantasy and magical realism, and I've wanted to design a setting that takes place in something vaguely resembling the contemporary world, but I often find it over-constraining, and hard to avoid being too derivative of previous works. I've also at various points talked about my interest in the concepts of Buddhist attachment and karma. Finally, these ideas and others I'd been sitting on started to gel, and I came up with this setting.

This will hopefully be the first of several posts. This one is a bit more abstract, and in future posts I may go into more of the dry details of what it all means.

This is a setting where Sun Wukong defeated Buddha, and the Karmic Cycle is imbalanced, as the Celestial Bureaucracy serve the whims of their child-like ruler and the Numberless Courts of Hell have risen to Earth to bring some semblance of Order. Over a thousand years later... It's basically our world, but the hellish and Kafka-esque parts are literal.

This setting is inspired by the novel Journey to the West, Chinese and Buddhist mythology, the Invisibles, the Matrix, John Wick, Sandman, Persona 5, and the short story Folding Beijing, among others.

Over a thousand years ago Sun Wukong, The Great Sage Equal to Heaven, the Monkey King born in stone nourished by the five heavens, challenged Buddha, and won. The Monkey King is not inherently malicious, but he is child-like; selfish, impulsive, and prone to tantrums. Heaven has fallen into disarray as the entire Celestial Bureaucracy buckles to his whims, and the Karmic Cycle has become unbalanced.

Karma is the embodiment of the material world, once held in balance by the Celestial Bureaucracy of Heaven and the Numberless Courts of Hell. The karmic cycle is one in which humans accrue karma as they grow attached to the world, and must divest themselves of karma in order to eventually enter Heaven. Those who fail to sufficiently divest their karma in life are processed in the Numberless Courts of Hell, and eventually reincarnated, until their material soul is sufficiently divested of karma so that their spiritual soul may pass on to Heaven permanently, or they are lost to their own karma and become a Devil.

However, with Heaven in its current state, the Numberless Courts of Hell have had to pick up the slack. Around 500 years ago Yama, The Judge King of Hell, raised Youdu, the capital of Diyu (Hell) to Earth. While the Earth of the present closely resembles our world, all the governments of the world submit to the Numberless Courts. Monstrous Devils operate the Kafka-esque Bureaucracies of this world, much as in our own, but also there are humans capable of great material feats of karma and great spiritual feats divested of karma. There are also mages and alchemists who are one (and not one) with the Tao, twisted and pitiful Poltergeists serving time in the Numberless Courts, demons and nature spirits (the difference often merely being politics), refugee Gods, and the eldritch Mu.

The world is a complex and layered mechanism folded in on itself like a transformers toy or really high quality pop-up book. Socioecenomic classes, spiritual "classes", Youdu, cultures and subcultures and counter cultures, identities, coexisting in total chaos that is all, somehow, almost coherent. Mainly because you only ever see a small sliver of it at a time. Most people only see a sliver of it, ever.

Go to work, or school, or take care of the kids, or chores, or go the gym. But when you come to the table, you're an artist, a philosopher, a warrior, a monk, a mage, a rebel, a celebrity, a grotesque poltergeist, a demon or nature spirit, an executive, a mu-host. You are not a Devil or God because they're something else, let's just put those two aside for now. You can be literally anything else. You can be happy. You can be miserable. You can be. 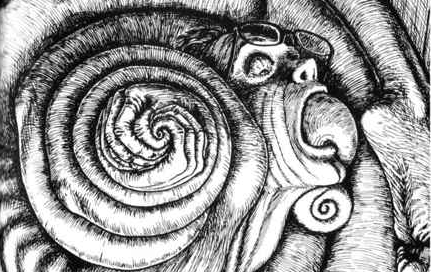 
Keep busy. Go to work. Find a partner. Procreate. Make money. Pay taxes. Don't overthink it. Venerate your elders. Pray. Follow the rules. Be polite. Don't ask questions. Fill out this form. Get mad and scared at the things on TV. Don't doubt yourself. You are Right. Always.

Or fuck that. You're here, aren't you? Be a rebel. Fuck the System. Think critically. Challenge others. Challenge yourself. Get mad at injustice. Do something that matters.

But you do have to pay bills. And you like nice things. And seeing all the flaws in the world only drags you down deeper, endlessly eating your own tail like an Oroboros until you inevitably hit cognitive dissonance, psychotic break, or nihilism. Be logical but not at the expense of empathy and be empathetic but not at the expense of logic. Rise above so you can see the truth impartially. Know when you're Wrong. Rise above yourself. Wei Wu Wei.

But what do I do really?

Kill Yourself. Everything is fucked, it's only just nice enough to keep you complacent, if you can be so lucky. When you're lost deep in Diyu, standing in one of the never-ending, never-moving, numberless lines of the Numberless Court, take a good, hard look at yourself. You pitiful, grotesque poltergeist. Clinging to existence. Clinging to what? Why are you still here? Keep staring, no matter how much it hurts. You're disgusting.

Acclimate to You. Get bored by You. Think about You impartially. Come to terms with You. Embrace You. But also, let's be honest, You could do a little better. Do a little better, how about it? I've got your back. Let's do this together! Get out of the fucking line. Run! Run all the way up to Youdu. Find your material soul. Reincarnate. The Old You is Dead. Fuck the Old You, they sucked anyway. Be glad about it, that means You are better now. Be the New You. Long Live the New You.

Fight the System, but also Fight You. I know you worked so hard just to get your humanity back, so you're not going to want to hear this, but now I'm going to ask you to start accruing karma again. Because there is work to do. Get involved in the world.  Like it all matters. See what's out there. Fight injustice. Fix the broken things. Help people. Help people help themselves. Do all that, but don't accrue too much karma. Know when to quit. Or, Kill Yourself. And try again.
Posted by at 9:10 PM