Anyone Can Wear the Mask with Jeff Stormer!

I got to play Anyone Can Wear the Mask with the man himself, Jeff Stormer! We played over Discord, with Jeff as The City, me as The Villain, and my friend Aaron as The Hero. I had listened to some actual plays of the game he had done with The One Shot Podcast Network and on his own Party of One Podcast.
The game was very loosely set in Maximum Recursion Depth, and specifically in "Bell City" inspired by Jeff's experiences living in Philadelphia. It was also a pretty much entirely nonviolent scenario. Both the hero and the villain, and nearly all of the other characters, had nonviolent-based powers, and most of the threats encountered were of a nonviolent nature. We hadn't explicitly set out to do that necessarily, but I think it's pretty consistent with how I've been thinking about things and trying to do things lately so it was a pleasant outcome. It's also cool to see that this system totally supports that kind of play. 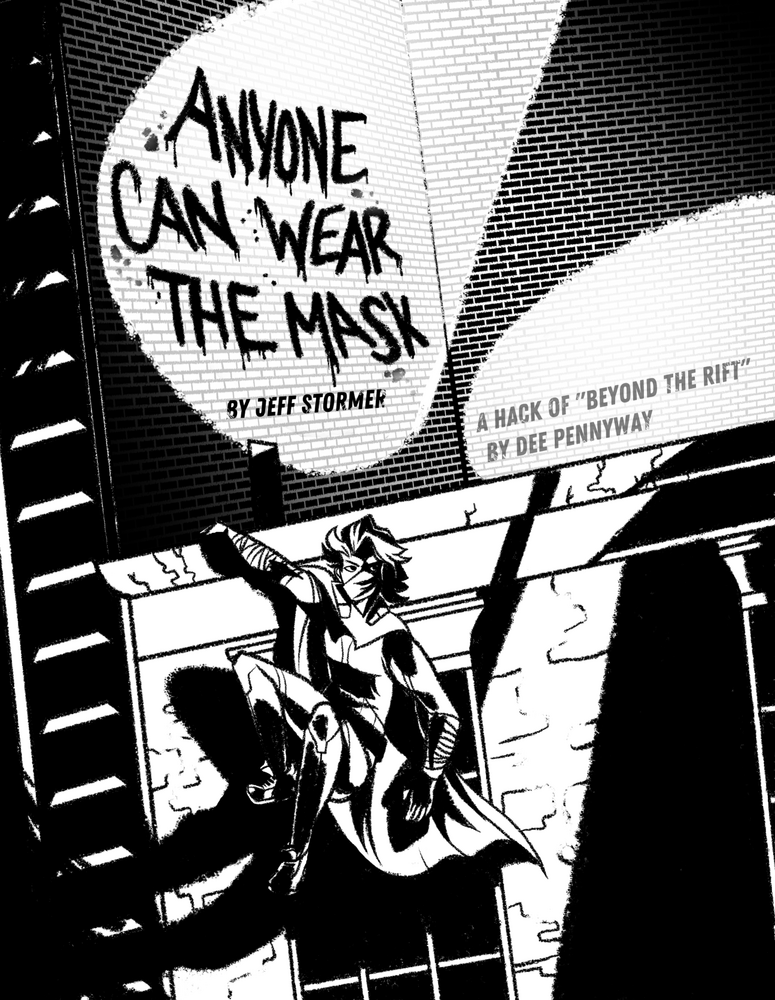 I had an absolute blast playing this game. Jeff for sure brought a lot of creativity and charisma to the experience, but I have no doubt that Aaron and I could play this again with others, and in fact, have talked about doing so. As someone who plays primarily OSR / NSR type games and not as many narrative games, but who loves worldbuilding and storytelling and also superhero comics, this nonetheless all played out very organically. The system itself is very straightforward and basically unfolds the narrative in itself. I was surprised how easily we were able to tell a coherent and moving superhero story, one that explores themes of personal interest, with themes we were able to establish early on and use as throughlines for the whole session, culminating in something that felt weighty and impactful, as if we had carefully constructed the story as if we knew how it would end from the very beginning. I could also very easily imagine using this system as a starting point to build a world for a larger campaign. I am very glad to have supported this game and had the opportunity to play with Jeff, I hope people enjoyed this story and check out the game for themselves!
Posted by maxcan7 at 12:16 PM

Email ThisBlogThis!Share to TwitterShare to FacebookShare to Pinterest
Labels: anyone can wear the mask, appreciation, maximum recursion depth, not-review, one shot network, party of one, play report