I enjoyed writing the Mythic Beings Retrospective, a re-examination of my very first post, so I decided to do another retrospective. I recently published my second game, Maximum Recursion Depth, for the Eclectic Bastionjam, so I thought I might do a retrospective on my first game, Pixels & Platforms for the SWORDDREAM DREAMJAM (I also wrote an article about P&P for the high level games blog).

P&P is intended to simulate the experience of old-school 2D platformer videogames in a tabletop RPG, using a resolution mechanic building off of Lasers & Feelings. It is loosely framed within my setting The Quantumverse, although the way I present it in P&P is more so like an off-brand NES crossover (although I do have bigger ideas for that setting which I haven't written about).

There are three attributes; JUMP, SPECIAL, and FIGHT, and each attribute has a Light and Heavy input. For each attribute, you choose a NICE! number between 2-5. For Light actions, you want to roll over the NICE! number (lower is better), and the reverse for Heavy. The particulars of what these attributes are used for, and the differences between Light and Heavy Inputs for each attribute, are described in further detail in the Select Screen and Control sections of the game, but this is the core of the game mechanics.

The CPU (the term for the GM in this system), designs a Platform Crawl, a series of Screens (or Stages, or Worlds, depending on the scope of the game), consisting of traversable platforms and various enemies and obstacles. Unlike a real 2D Platformer videogame, there is obviously no real-time input for platforming, and very early on I decided that the challenge should not come from success or failure on JUMP rolls per se; that would basically just be chance and not very much fun. Instead, the platform crawls should be designed such that there are many ways to go about getting from one end of a stage to another, and it's a matter of the party figuring out how to leverage their attributes and special abilities to collectively get across. In some ways, it's almost more like a boardgame than a TTRPG per se, for better or worse. I have some additional thoughts on this which I discuss in the conclusion.

There were a lot of ideas for this game that I think worked, and some that didn't. It's biggest flaws, I think, are that it lacks polish and that it needed more supplementary content. In particular, it very clearly needed to have a platform crawl module included. Despite being a small game, I think it was actually fairly ambitious in what it tried to do, but as a result, I needed to do more within the text to demonstrate to readers how it should work. I also think I needed to have a deeper understanding of it myself. In retrospect, I wish I had designed the resolution mechanics and the platform crawl concept independently and tested them at least to some extent independently, to better understand how to polish the mechanics and articulate them. In general, I needed more playtesting.

That being said, I still think it is an interesting game, with ideas worth consideration and worth exploring further, and I hope this retrospective maybe convinces people to give it a look, or think about these ideas, and maybe I will be able to one day come back to this game and turn it into what it really should be. 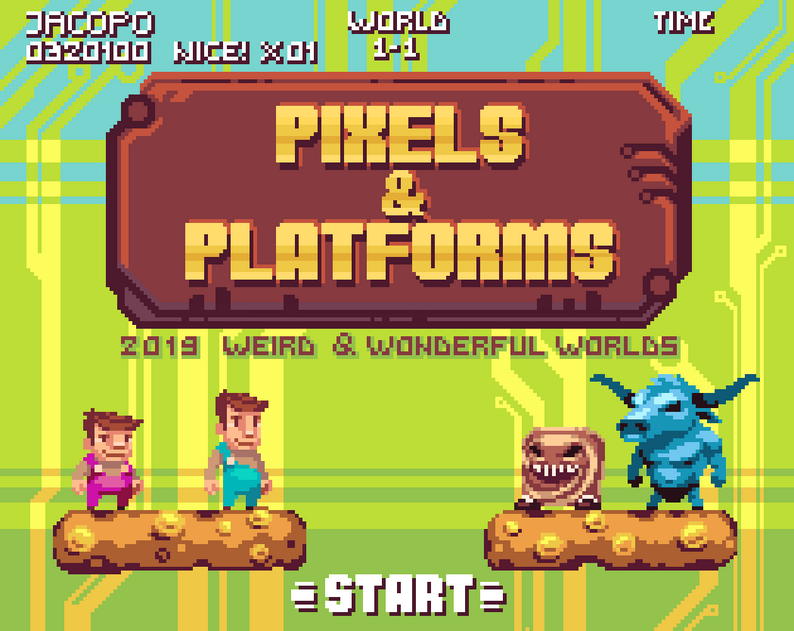 The layout could use some work, it's definitely pretty dense, but otherwise, I think looks pretty good. HarveydentMD's cover art is great, and the itch page looks good, and I'm happy with the font I used for the game text itself. It's like a poor man's Super Blood Harvest. In retrospect, if he were even open to doing it, I wish I had commissioned HarveydentMD to do the layout as well and make the whole game look like the cover art and itch page, then it would compare more closely with SBH.

I have mixed feelings about some of the terminology, but overall, I really wanted the game mechanics, down to even the terminology, to be evocative of old-school videogames, and I think I succeeded in that regard. Whether that ultimately makes for a better TTRPG experience is a separate question which I'll discuss later.

The setting. Despite the fact that I include very little explicitly about The Quantumverse within P&P itself, and most of what is included is like an off-brand Nintendo crossover, I still like the way the character classes, enemies, items, etc., generally present. I had some more ambitious ideas for the setting which I never ended up writing about, unfortunately, but I assure you there was more to this setting, in a classic Weird & Wonderful way, if you've been following this blog long enough to have any sense of what that means. Unfortunately, it is unlikely that I'll ever come back to this setting unless out of nowhere there is suddenly an outcry for more on this game or setting, which is a shame, but my main focus right now is MRD.

The classes. With the caveat that they needed more playtesting and balancing, and I don't necessarily think it makes sense for only two classes to have a variety of options given the Spellbook. In retrospect, there should have been some caveat, like maybe the spell they can cast at any one time is selected randomly, so at least there's a tradeoff to their versatility, or something like that. In any case, I tried to give the different classes special abilities which actually made them interesting and change how a player could interact with the world, and I think within the context of the platform crawl design, it makes sense. It's more prescriptive than I generally prefer in TTRPGs, but within the context of what P&P is supposed to be, I think it makes sense.

The core resolution mechanic. The idea of treating an attribute as two-dimensional; as an axis, where the number on that axis doesn't necessarily mean good or bad, but good at one category of thing and proportionally worse at an opposing category of thing, is really clever and in my opinion underutilized in TTRPGs. I don't understand why this mechanic exists only in L&F or L&F hacks. P&P is to the best of my knowledge the first and only game to actively try to build on this mechanic, as opposed to being just a straightforward hack, and also to leverage it in a totally different way, that way being as a "simulationist"-style mechanic.

Along those lines, putting aside the toxic and, I'll say frankly, stupid debates people used to have on "GNS", since as far as I'm concerned it's a decent heuristic regardless of whether it is a fundamental truth of the universe, it is the only game I can think of that is "simulationist", while also being rules light. "Simulationist" games are generally very crunchy, whereas I tried to use the simplicity of the two-dimensional attributes along with the terminology and platform crawl design pattern to simulate the experience of an old-school 2D platformer videogame in the absence of "high-fidelity" crunch. Regardless of whether or to what extent it succeeded, I still think this is conceptually really cool and with some polish could potentially work quite well.

Things that did not work

Due to time constraints, I only had one playtest, and that one playtest went poorly, which was part of why I did not follow up with as much additional content for the game as I had originally intended. I do genuinely think the poor playtest was in part due to extenuating circumstances and a couple real rooky mistakes in how I ran it, but it was still discouraging. I made a lot of changes after that playtest which I do think were for the best, but those changes were not playtested, so I am not as confident as I would like to be that those changes succeeded. There are also some things when I look back at the game, even without further playtesting, that I know are rough around the edges and need more work.

I said this in the overview, but this game absolutely needed a platform crawl module included. At the core of P&P is a very goal-oriented, puzzle-like design pattern that I think could really appeal both to OSR gamers and the kinds of people who like the tactical combat of D&D 3.+, but without a demonstration, I think it was hard to explain this concept to anyone. Also, frankly, I am not a very visuospatially capable person in the first place, so in retrospect, I wish I had collaborated with someone with those kinds of sensibilities, or even attempted some kind of random auto-generation approach. While this game is not crunchy, it does require a playmat or some other visual or tactile representation, and my reticence to acknowledge that hurt my playtest and the lack of that kind of support really hurt the game as a whole. I do not own Mario Maker, but my players had rightfully suggested that something like Mario Maker could have been a useful tool for roughly designing platform crawls. I still think that, or just taking asset rips of the stages from old-school 2D platformer videogames, could work really well for P&P, at least as proofs of concept.

My hope was that the terminology would be flavorful, and also intuitive. However, at least in the playtest, everyone had a very difficult time keeping track of the terminology, myself included, mainly from being flustered because I definitely understood it all beforehand, but if I failed to keep track of it while running the game, that means it failed. After the fact, I completely reworked the terminology. Rather than having separate terms for each end of the axis for the three attributes, and using the terms Left and Right "Inputs" for the axes of the attributes which obviously got conflated with left and right movement across the Stages, I replaced Left and Right with Light and Heavy, and just referred to them as e.g. Light Jump and Heavy Jump rather than unique terms for each. I also think maybe some kind of visual aid even within the game text itself, like a graphic showing what a rollover vs. a roll-under success would look like next to the description of Light and Heavy Inputs, could have been very helpful. Given how the first playtest went, I am somewhat skeptical whether these new terms work and would ideally like to playtest them as well, although I do hope they're at least an improvement.

Talking about this game really makes me want to playtest it again, and design a proper platform crawl module to go along with it. This concept I genuinely think has so much potential, but it's very experimental and just needed more time and playtesting. I almost would want to make it a sub-game, like run a campaign in The Quantumverse using something more like an Into the Odd / Super Blood Harvest hack, and then make platform crawls an occasional thing like one might do with hex crawls, dungeon crawls, point crawls, etc. That would also put a lot of burden off of this system to accommodate more heavy lifting in RP or non-platform crawl activities, which is decidedly not the case.

If this at all seems appealing to you, please let me know. My main focus right now is on developing and expanding Maximum Recursion Depth, so it would be hard to justify putting more work into this unless there was any interest whatsoever in it, but clearly I'm trying to talk myself into it...
Posted by at 7:59 AM