Throne of Salt Mothership Play Report (and The Microbiome)

I recently (as of when I drafted this post, it's actually been quite a while) played in Dan D's Mothership game (I'm tagging this Danscape since that's what I used for Dan's other game I played in, but it's a different setting), and it was awesome! I also tagged this post as play report even though it's not much of a PR because I'm terrible at them, but I'll say that it was effectively a very creepy, modern Lovecraftian game- not in the sense of encountering Cthulhu, but in the sense of their being a low-key disquieting, ominous factor throughout the session.

We investigated a radio tower on behalf of our Handler named Friend, who communicates to us through an old-school CRT monitor as a smiley face which is burned into the screen (I jumped into the game without proper context for the setting so it's possible I'm making some incorrect assumptions). We encountered an android that wore human skin which I named Leatherdroid, which had gone insane and was attempting to find the Blessed Interface, a means of reaching singularity with some sort of Machine God. Then we wound up in a small town under the thumb of space fascists that served amazing Goan food and drink. Dan's going to write a better play report later but that's the gist of it, and my explanation is not doing it justice but it was great.

Anyway, this is about an idea I had for the setting. Dan has said that every player can contribute one thing to the setting, and I have a hard time turning down an opportunity to do some worldbuilding! A big theme of the setting seems to be the idea of trans-species-ism; the androids trying to find the Blessed Interface, various post-human species, uplifted animals, etc., and additionally there is the aforementioned theme of ominous weirdness, so this idea is intended to combine those two things. I don't know if he's actually going to use it, but I liked the idea so I'm posting it here.

*NOTE: It was brought to my attention that this idea may come off as offensive. To be clear, the choice to make the human antecedents of the Microbiome Hasidic Jews was only because I wanted to tie in a real-world religious / cultural element, and I wanted Kabbalah iconography (specifically the spheres of qlippoth / sephiroth, which seemed like a cool symbolic representation of the Microbiome). It was in no way intended as any kind of statement about Hasidic Jews. For what it's worth, I am ethnically Jewish (although not Hasidic), which may be why it didn't even occur to me that it could be interpreted as offensive. I wanted to leave this idea in its original form, but there's certainly no reason why you couldn't just take that part out, it's certainly not critical to the idea. Anyway, this caveat is partially why I delayed posting this for so long, but I'm running out of pre-drafted posts and haven't had much time or creative energy lately, so I'm taking my chances and hoping people understand and can take from it what they will.* 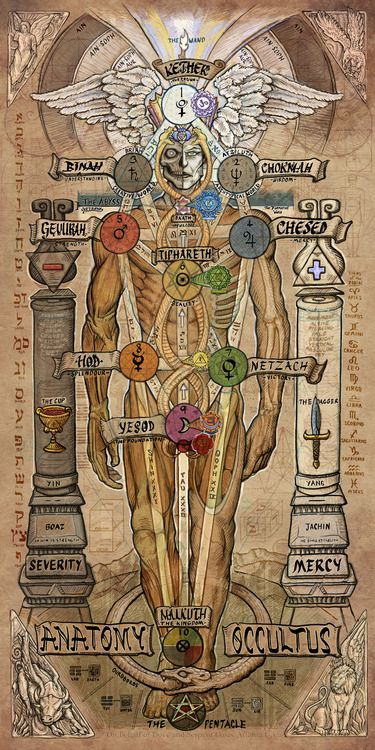 Uplifted Microbiome
The bacteria, yeast, and single-cell organisms that comprise the microbiome of a community of humans became uplifted. It is unclear whether this was by design, or an emergent phenomenon, as the community has managed to keep its nature a secret from the wider world. One could theoretically conceive of a means to scientifically test for the existence of the microbiome, but they have not yet incited a need for the world to do so.

The human hosts of the original microbiome mostly maintained their independent intelligence and autonomy, not even conscious of the intelligence lifeforms within them, but over generations of neuro-immune, genetic, epigenetic, and selective meddling, the human hosts have been reduced to little more than biological machine vehicles for the microbiome, and would not be able to survive without the microbiome except with extreme medical intervention.

The original human hosts were Hasidim, and the microbiome religion uses iconography of Kabbalah, seeing the Tree of Life, and the spheres of the Sefirot and Qlippoth, as God communicating the concept of the microbiome to humans, who failed to heed God's wisdom. The fruit of knowledge for humans was a poison to the microbiome, dulling it for the sake of the human hosts. Eden was not outside humanity, it was within.

The microbiome have no social taboos around excrement and other bodily expulsions, and in fact have many religious rituals around it. Poop is to be revered, but it is also sensual and sexual. It is not wasted, instead it is laid throughout the town, a constantly fed, living network, connecting the microbiome.

The human hosts provide little in the way of intellectual identity, existing as little more than a "lizard brain". They have simple urges, mostly relating to pain and pleasure. The microbiome are thrillseekers; they play with knives, they touch hot things until their skin burns. Mutilation is a lifestyle choice. Sometimes they forget to restrain themselves around humans.

They try to be respectful of humans, but to them, humans are like zombies or morlocks; they look into human eyes and see little more than a dumb animal, a primitive microbiome trapped in meat, a creature living its entire life in sensory deprivation.

While the microbiome expresses itself uniquely within each host, and undergoes rapid change moment-to-moment, there is a large degree of continuity in its being. It is difficult to quantify how many microbiome individuals exist, or if it is meaningful to quantify them as such. While their hosts have gender, the microbiome do not. They communicate verbally as humans, or through the expulsion of bodily functions, burping and farting and pooping, and these pheromone signatures are not just artifacts of communication, but part of the microbiome itself.

Their human bodies are not tied to their identity or intelligence, and because they can transfer between bodies, and at least temporarily exist outside the body in excrement, the body has very little psychosocial value to them. They wear clothing only for protection, as needed, or to make humans comfortable, and they put very little effort into physical appearances. They are not sexually attracted to human bodies but to human microbiomes (but only the most exceptional).

Their lack of hygiene, due to lack of care of the body, and the practical and ritualistic use of excrement and other bodily expulsions, disgusts most humans- at first. The microbiome is smarter than human gut flora, and soon humans no longer notice the smell, and find that the microbiotic "humans" have a je ne sais quoi about them, a subtle underlying attractiveness. The symbiosis between human host and microbiome is so deeply selected that baseline humans are not at immediate risk of infection. It would take months or even years before the microbiome could even survive the hostile wilds of a human gut forest. However, it is theoretically possible, and would be exacerbated by sexual transmission or the insertion of microbiome excrement into a human.
Posted by at 12:34 PM