I realize I haven't made a real blog post in a while. Once the funding period for the Kickstarter has ended, I'll share some updates and thoughts about how I intend to continue with the blog while also working on completing Maximum Recursion Depth.

The Maximum Recursion Depth Kickstarter has met the second stretch goal! This means that Scrap Princess will produce an original piece of art for this issue! Scrap Princess's piece should be a nice accompaniment to Vallinin, who has done amazing work for the game so far and will continue to be the primary artist on this issue. We've nearly completed the fourth Poltergeist Form and it is possibly the best yet (I happen to know it's his favorite...).

Scrap Princess and I have not decided on what exactly her contribution will be yet, but for reference, included below are three pieces of art she's produced for one of my other campaign settings, Phantasmos. 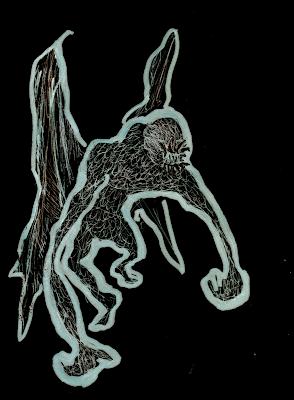 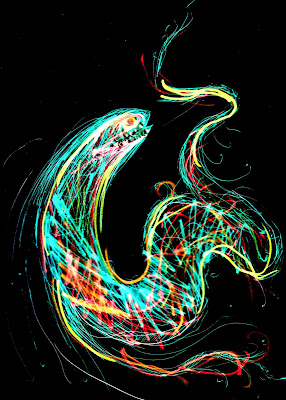 The Maximum Recursion Depth Kickstarter has met the first stretch goal! This means that Fiona Maeve Geist will produce a Poltergeist Form for this issue, bringing the total number up to 7! This will also be the first official Poltergeist Form not created by me.
I would generally encourage people to consider creating their own Poltergeist Forms if they feel so inclined, but admittedly, I do not have a specific framework for doing so at the moment. Likely, while discussing with Fiona, I will end up having to create that framework or inadvertently creating it in the process. That may or may not make it into the book in any formalized way, but at least it will be one more interesting Poltergeist Form, with a unique perspective, which hopefully people will appreciate. Maybe I'll share a formal framework for creating new poltergeist forms on my blog, or in a future issue.
In any case, I'm really excited to see what she creates!

Mothership Dead Planet, by Fiona Maeve Geist, Donn Stroud, and Sean McCoy. In my headcanon (and in absolutely no official or authorized sense...) this makes Maximum Recursion Depth the black sheep stepchild to Mothership.
Posted by maxcan7 at 9:57 AM 1 comment:

The funding goal for the Maximum Recursion Depth Kickstarter has been met!!!!! Still hoping to get the stretch goals, would love to have Fiona Geist as a guest writer of a Poltergeist Form and a couple pieces of Scrap Princess art, but anyway, this is very exciting, to have gotten fully funded in under a week!

Also, I was interviewed about Maximum Recursion Depth last night on The Hardboiled GMshoe's Office! I think it was a good discussion about the game, and they asked some good questions. I hope people give it a look.

EDIT: I had meant to write some other stuff in here and then completely forgot. Anyway, I have to actually do my job, but this weekend I'll have a follow-up post about some stuff now that the goal for the MRD Kickstarter has been met.

Quick Update, a bit last minute, but I will be interviewed later this evening about my Kickstarter for Maximum Recursion Depth! Details below:

EDIT: Here it is! Here's my interview with The Hardboiled GMshoe's Office

I just launched a Kickstarter for Maximum Recursion Depth! It's going to include a ton of new content and revised content, awesome original art by an amazing artist, awesome stylistic layout. This is a preview of MRD becoming what I had always intended for it to be. I've scoped the project so that I'm prepared to fund it entirely out of pocket if necessary, but a successful kickstarter will allow me to do more, more quickly, and will make it more feasible for me to continue to produce more content in the future of this level of quality and with these and other partners. I have a lot of doubts that this will succeed, and it's scary and depressing and a little embarrassing thinking about how poorly this is likely to go, and frustrating to believe this despite how much work I've put into this. But, it was a good learning experience, it forced me to think about certain things more thoroughly, to be prepared to really commit myself to doing this. So it's happening, one way or another, even if the KS fails. But I really hope it doesn't... 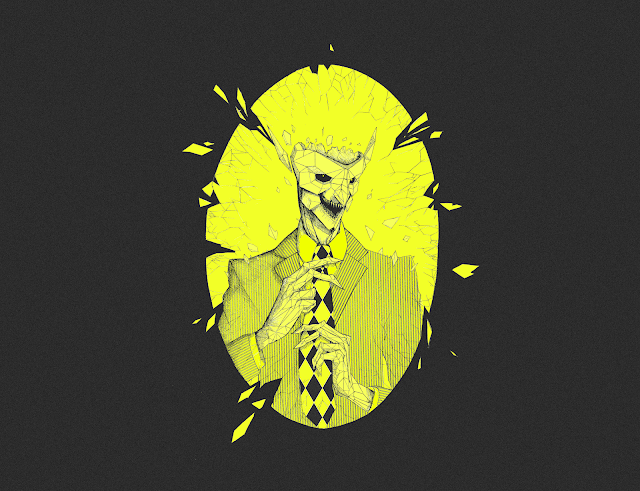 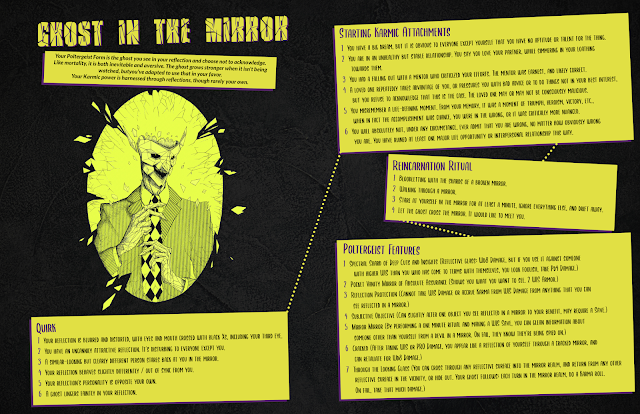 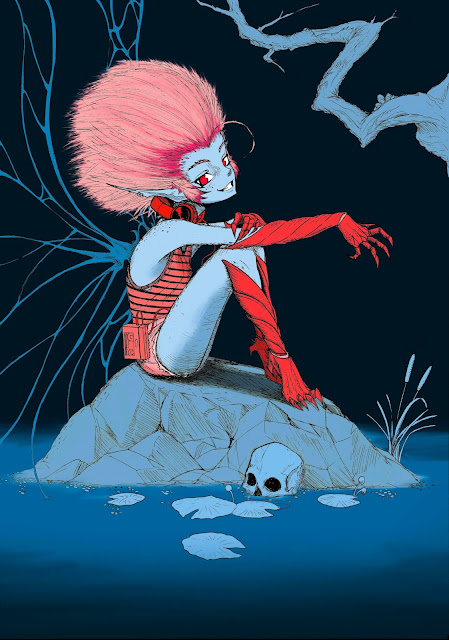 I've been running a game of Maximum Recursion Depth with a different group while my main group is (hopefully just temporarily) on hold. In trying to prep a new player to join the second session, I wrote for them what was basically a play report, so I figured I'd share it here since I think it broadly reflects the kinds of ideas one should expect for this setting. I'm terrible at writing play reports and there are a lot of details that are probably getting glossed over, but hopefully, it's something. I hope to have more "somethings" for Maximum Recursion Depth very soon.

Rat Jack: An illegal Poltergeist, part of Polterzeitgeist / Council of Jacks. Also, a drug dealer who works for Chester, the Cheetah Nature Spirit. Hired the party to investigate Goblin Jack.
Goblin Jack: Short, ropey/gangly dense muscles, scruffy, rugged, and kind of ugly. An illegal Poltergeist who is accruing too much Karma and is on the verge of becoming an Ashura. Has gotten involved with the drag performer Pro-Fane, and has a personal connection with the drag performer Doctor Lovesmenot. Has gone to war with the Deseret Avengers, a trans-national hate group within the US, Uruguay, and Ruritania.
Pro-Fane: Popular African American Drag Queen. Rumored to be Seneca Tiger. Her style is like if a Japanese horror girl became a ganguro TikTok influencer. Friends with Doctor Lovesmenot and involved with Goblin Jack. Has a TikTok feud with Moon Marine, who alleges she's the culprit of "The Platypussy Leak".
Moon Marine: Famous superhero with a secret identity. Attractive blonde zoomer TikTok star. Costume like a Marine Dress Uniform except colorful, mostly in shades of blue, tastefully revealing, and platypus themed (the hat looks like a platypus bill). Is actually a white nationalist, part of the Deseret Avengers, and she uses her fame to coerce her fans into joining DA and other internet hate groups. The "Platypussy Leak" is the name of her recent sex tape leak, which may have been intended for an onlyfans campaign.
Chester: A humanoid cheetah-like Nature Spirit and drug dealer. His main drug is Dharmafodil aka "Chedder"
Udo Kier: A famous character actor who died in late 2018. Goblin Jack was hired to smuggle him out of the Numberless Courts of Hell bureaucracy, and it is not publicly known that Udo Kier is a Poltergeist. While IRL he is German, in this setting he is Ruritanian, and has a begrudging connection to the Deseret Avengers. He will play Dracula, the lead villain in Marvel's upcoming Blade movie. (I'm pretty sure he is still alive IRL)
Doctor Lovesmenot: Wealthy drag/burlesque performer, the lead performer of Doctor Lovesmenot's Hectic Eclectic Erect-ic Freak Show. Has a long-standing Karmic Attachment with Goblin Jack, and is friends with Pro-Fane. Genderqueer. Is like a cross between Jareth the Goblin King, Ziggy Stardust, and Snake Plisskin.
Soft Mother: A cartoon humanoid in the form of a voluptuous woman, like a cross between Jessica Rabbit and Betty Boop. Has some kind of relationship with Doctor Lovesmenot.
Rob Santos: An Uruguayan immigrant who used to work for Mateo Silva, who is connected to the Deseret Avengers. Was murdered at the party.

The PCs were hired by Rat Jack, an illegal Poltergeist Mobster-type, to find his "brother" Goblin Jack, a rogue illegal Poltergeist who has gone to war against the Deseret Avengers, a trans-national hate group, and he is on the verge of accruing too much Karma and turning into an Ashura, a Karma devil.
They learned that Goblin Jack was friends with Pro-Fane, a drag performer in the Bushwick-area who is associated with the Seneca Collective, a BLM-related organization in the setting, and is rumored to be the vigilante Seneca Tiger. They also learned he had some kind of connection to the drag/burlesque performer Doctor Lovesmenot.
They went to one of Pro-Fane's shows at a bar in Bushwick (which exists IRL), where they encountered Deseret Avengers protestors, in part protesting the performers because they are assholes, and in part specifically protesting Pro-Fane, who is in a TikTok / Twitter war with the vigilante Moon Marine, over her sex tape "The Platypussy Leak" (her costume is somewhat platypus themed). Moon Marine blames the leak on Pro-Fane. They convinced a Deseret Avenger who had intended to shoot up the bar to drop his gun and reevaluate his life, befriended Pro-Fane, and got invited to Doctor Lovesmenot's Halloween party.

At the party, they learned that Doctor Lovesmenot and Goblin Jack were "brothers" from even before Goblin Jack became part of Polterzeitgeist and part of the Council of Jacks, who also re-confirmed that Goblin Jack has been going off the deep end. They also met Soft Mother who seems to be tied up in that relationship.

They investigate the non-Euclidean penthouse and find a bunch of weird rooms like a drug den room where they met the cheetah-like Nature Spirit drug dealer Chester who Rat Jack works for, and they also met the illegal Poltergeist Udo Kier, and a room for virgin fuck boys who like Lovecraft too much, and eventually, they bump into Moon Marine. She snuck into the party to try to get dirt on Pro-Fane.

The PCs find a dead body in one of the rooms and believe Goblin Jack killed him. They were going to chase after the culprit but the monster got away from them.

They convinced Moon Marine to watch over the body; saying she can try to frame Pro-Fane, but really they're just trying to stall so they can get to the bottom of all this.

They go into the air ducts to spy on the rooms and find Doctor Lovesmenot talking to someone who seems to match the description of Goblin Jack. They briefly turned off the power and surrounded them, and we left things on that cliffhanger.
Posted by maxcan7 at 11:26 AM No comments:

I just launched a Kickstarter for Maximum Recursion Depth! It's going to include a ton of new content and revised content, awesome origi...